Lee: To start off, tell us a little about yourself and your work as an author:

Claire: Hi, Lee! I’m a multi-genre indie author from the UK trying to juggle being a mum, wife and author all at the same time. I love writing and I’m still constantly amazed and thrilled when someone else enjoys reading my books. At the time of this interview, I’ve published thirteen books and have short stories in a further four anthologies.

Lee: Tell us about your latest book, The Gaia Solution:

Claire: The Gaia Solution is the third book in my hopeful dystopian trilogy. The story is set two hundred years in the future and follows a group of friends who learn in the first book, The Gaia Effect, that the Corporation who they thought looked after them was really lying to them and so their efforts to reveal that truth end up becoming the catalyst for new governance within their city. The second book, The Gaia Project, tells you what happens after Corporation retaliate and the friends have to flee for their lives. In the final book it’s all about survival and finding a safe place to live. Throughout all three books the spirit of the Earth, Gaia appears from time to time to lend a guiding hand when she can.

Lee: What was your inspiration behind the series?

Claire: I learnt about the Gaia Hypothesis when I was working for natural history society, The Linnean Society. The hypothesis states that no matter how badly damaged the planet becomes, nature will rebalance the scales and an equilibrium will be maintained – I’m paraphrasing but that is the basic idea. I was fascinated by this and after seeing some wonderful artwork depicting Gaia by Josephine Wall, inspiration started to percolate. I based the first book on a flash fiction I’d written nearly seven years ago and the rest was the result of discovery writing.

Lee: Do you have any favorite characters from the book? Which character has been the most fun to write?

Claire: I don’t have a favorite although I think Kira is the most like me. I enjoy writing the quirky characters the most so for book three that would be Bennett and Artem. Writing quirks or unique dialogue is a lot of fun.

Lee: What made you decide to become a writer? Was it something you always wanted to do?

Claire: I have always dreamed of publishing a book and when I was little I used to write short stories and poetry all the time. Then, in my early twenties, life got in the way and I stopped writing completely and it wasn’t until I saw a poster for a local writing workshop about seven years ago that I went back to writing. Once I’d finished The Gaia Effect I knew this was what I’d always wanted to do and since then I’ve never looked back.

Lee: What book or story would you say inspired you the most as a writer?

Claire: I’m constantly inspired and sometimes intimidated by good writing. I’m a terrible reviewer because I always read from the point of view of a reader and never as a writer casting a critical eye. I do try to stop and think about why a particular book, scene or character manages to blow me away and how exactly that author achieved such brilliance. I read a lot so I constantly have new favourites but as a younger reader my introduction to the fantasy section at the library was a huge influence on the types of books I now love to read and try to write.

Lee: What three things, if any, do you need to have on hand to write?

Claire: I like to have peace, it doesn’t have to be quiet but I need to know I won’t be disturbed so I often write in the evenings after the children have gone to bed and before my hubby has come home from work. Alternatively, if he has the day off, I’ll bribe him with baked goods so I can leave him in charge of the kids while I sit in the coffee shop first thing in the morning. It’s not that busy before 10am and it’s the sort of bustle you can work through. I need tea and I need my laptop. I can write pen and paper but nine times out of ten my thoughts are going too fast for the pen and seeing as I can touch type very fast, using the laptop works best for me.

Lee: The Gaia Solution is the third book in the series. When you had the idea for the first book, did you have it planned out as a series? Or did it develop naturally?

Claire: Originally The Gaia Effect was a standalone because it was my debut novel and I didn’t have a clue about how to write a novel, how to write a series, how to be an indie author, have an author platform etc etc. I had no clue. But it soon became clear that I needed to write a sequel. I made a bit of a mistake thought because I wrote another book in a different universe before I came back to Gaia so there has been a long gap between books one and two. The Gaia Solution will be the final book in the trilogy although there may be a prequel novella. I’m almost decided.

Lee: What do you like to read? Who are some of your favorite authors?

Claire: I like to read adventure and heroes winning the day and magic and quests and a smidge of romance and something that will make me laugh and gasp and cry and marvel. So… quite a lot of fantasy and sci-fi! I belong to several book clubs which encourages me to read outside of those genres as well and I’m the best crime reader because I never, ever know whodunnit so it’s always a great surprise lol. Some of my favourite authors are Sir Terry Pratchett, Terry Brooks, Robin Hobb, Sara Douglass, Robert Jordan and Ben Aaronovitch but to get a real sense of what I love reading you should check out by Goodreads account.

Lee: What inspired you to write dystopian fiction?

Claire: I wasn’t inspired to write dystopian fiction, I was just telling the story for these characters in my head. It wasn’t a conscious decision – I’m a discovery writer so I never know what’s going to happen next. I often have the beginning worked out because I don’t start writing until I’ve been mulling in over for a while. Then I’ll usually write 40-50k in blocks of 1-2k words at a time. I don’t read back, I just continue where I left off and then when I hit the last few chapters I stop writing and start caps lock note taking about what still needs to happen. It means that my editing rounds are horrific because there are usually several chapters still to write and multiple plot holes but I also think that once I’m done editing, I’ve normally tightened everything up well.

Lee: What advice would you give to a writer working on their first novel?

Claire: Finish. That’s the main thing. Whether you publish it or not, whether you send it out for query or not, whether anyone else reads it or not. None of that matters yet, what matters is that you finish the book. Then once you have the complete novel in your hands you have a big decision to make – are you a hobby writer or is writing your career? The answer to that question will decide your next steps. But for the first-time writer, just finish. Get to the end and realise that it won’t be perfect my any stretch of the imagination but that doesn’t matter. You just wrote a book! 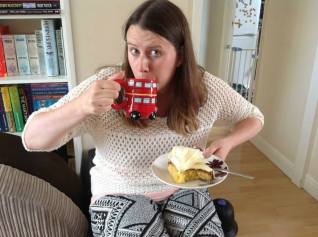 Claire Buss is a multi-genre author and poet based in the UK. She wanted to be Lois Lane when she grew up but work experience at her local paper was eye-opening. Instead, Claire went on to work in a variety of admin roles for over a decade but never felt quite at home. An avid reader, baker and Pinterest addict Claire won second place in the Barking and Dagenham Pen to Print writing competition in 2015 with her debut novel, The Gaia Effect, setting her writing career in motion. She continues to write passionately and is hopelessly addicted to cake.

Find The Gaia Solution on Amazon