The best advice I can give to you if you haven’t seen the show already, is to not watch Season 1, Episode 1, The National Anthem. Trust me, you probably don’t want to see that…

The strange thing I noticed about this show is that the seasons and episodes are listed backwards on Netflix. Usually when you go to a show, the first season is listed at the top, and episodes follow in a top-down format. This show lists the latest season first, and has the previous seasons below it. I think it might be an intentional way to avoid people from seeing The National Anthem first. It could definitely ruin the show for a lot of people, making them not want to watch any more episodes if they’d seen that first. A lot of the episodes are hit and miss, many not appealing to everyone.

That’s why I’ve put together this list for the horror fans out there. To filter out the stuff you might want to skip. By all means, watch the whole series; I did. But some episodes I enjoyed more than others.

I have to say this is probably my favorite of all the episodes in regards to horror. Great story, atmosphere, pacing, and ending. 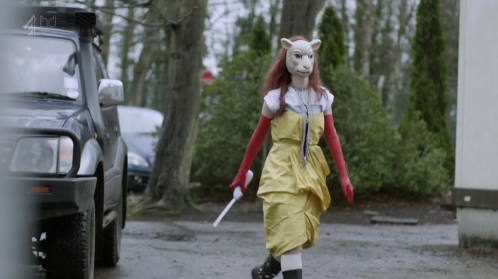 This is my second favorite. Post-apocalyptic scenereo with robots? Yes please! Again, great story, atmosphere (they did this one entirely in black and white), pacing, and ending. One of the best in the series. 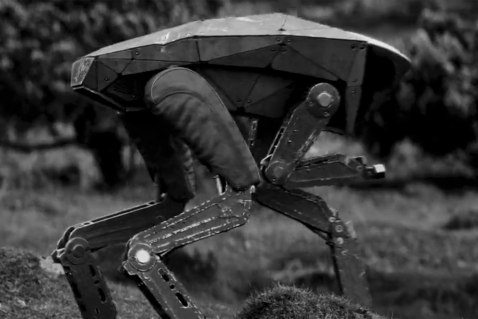 If you plan to watch the entire series, you should probably save this one for last. But the way the show is constructed, it doesn’t really matter. You’ll get the story. (There are just a few easter eggs in the episode you may see if you’ve watched other episodes).

This is also a great episode. Has its fair share of horror and a good ending.

This one strikes hard on fear of time. The cruelty of what occurs made me cringe. 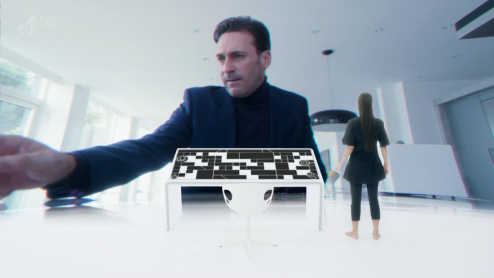 This one isn’t necessarily horror (it has its moments), but as a Star Trek fan it’s something I can’t ignore. By far one of the best Star Trek inspired pieces I’ve ever seen. Even if you’ve never seen Star Trek, it’s an enjoyable episode.

Hope you enjoy the show! And fair warning: don’t watch The National Anthem.

Today I’ll be hosting D.W. Gillespie on my blog in celebration of his novel, Still Dark. I personally read this book and fell in love with it immediately. That’s why I’m here to share this novel with you, and show the author support for this great story. I promise you’d be missing out not adding this to your to-read list!

Now for a few words by the author: 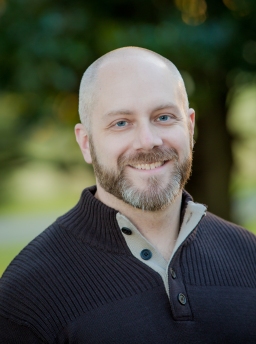 With the release of my first novel, Still Dark, I’ve been thinking a lot about the different sources of inspiration over the years. I keep coming back to how important my environment has been in shaping my work. It’s not just the metaphorical environment, such as my family, friends, social status and all that. It’s the literal environment too.

Still Dark is set in and around Gatlinburg Tennessee, a few hours away from where I grew up. It’s a place that’s a ripe setting for horror stories. The mountains, the empty, quiet woods, the abandoned barns set in wide open fields. There are ghosts everywhere in those parts, whether you believe in ghosts or not.

I spent a lot of time at my grandparent’s farm when I was a kid. The road was, well into the 90’s, still gravel, and I can still remember the feel of it as a kid, under my shoes, under the tires as I nodded off to sleep. At night, the trees seemed to meet over the top of the road, making a roof that stars or moon couldn’t quite shine through. All you had was the headlights marking the road just in front of you, and beyond that, well, there could be anything.

My imagination would run wild at the moonlight rippling on top of a pond. Of the sounds of an owl, lonesome and terrifying. The kids would play around the yard at night, and that seemed to help, the sounds of our voices almost chasing back the darkness. But it was all just a trick of the mind. The dark was still there, and if you walked over to the barbed wire fence, you could hear things out in the woods, pawing and hooting.

Things sort of changed when the sun wasn’t around. Way out in the darkness, there were trees so wide that a dozen people couldn’t reach all the way around it. There was a family cemetery, some of the stones hundreds of years old. There were dead ponds so thick with algae that you couldn’t even see the water. During the day, in the light, these were all curiosities worthy of study and exploration, but at night… only a fool would venture out there at night.

Now, I’m a grown man, and I know woods aren’t all that different at night as they are during the day. That sort of thinking, it’s for kids, isn’t it? And yet… I can still remember that feeling, how small and helpless I felt alone in the dark. I see it on my own kid’s faces from time to time.

That’s my environment, the land that helped make me. That open country world that still holds secrets to this day. It’s all over my writing, but especially in Still Dark. 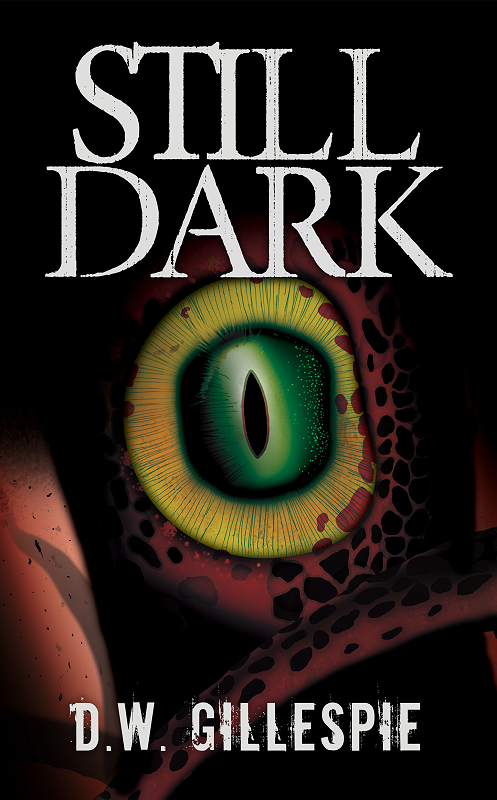 When a thunderous explosion rocks an idyllic cabin resort in the Great Smoky Mountains, animals and humans alike begin to act strange. Jim, along with his wife Laura and son, Sam, are cut off from the outside world, but they soon realize the true nightmare is just beginning…

Deep in the snow-covered woods, something is waiting. The creature calls itself Apex, and it’s a traveler. Reading the minds of those around it, Apex brings the terrifying fears hidden in the human psyche to life with a singular purpose: to kill any that stand in its way.

Locked in a fight for their lives, Jim and his family must uncover the truth behind Apex, and stop the creature from wreaking a horrifying fate upon the rest of the world!

ABOUT THE AUTHOR — D.W. Gillespie has been writing dark fiction in one form or another since he was old enough to hold a pencil. He’s been featured in multiple horror anthologies, both in print and online. Still Dark is his debut novel, and his second book, a short collection titled Handmade Monsters, arrives in 2017. He lives in Tennessee with his wife and two children.

I’ve been doing some horror movie articles and reviews on my blog, and while I don’t do them as often as I’d like to (too many other projects to work on) I want to continue the process, and attempt to regulate it so that there’s some consistency to when I post them. That got me thinking about why I write them, how I discovered horror movies in the first place, and where and when I was exposed to some of my favorites.

Before setting a plan to post these articles I wanted to go back to the beginning, remember where it started, and how my obsession with horror grew. I wanted to know how and why I became a horror writer.

Exploring the past is difficult. Memories are faded, distorted, untrustworthy. But some clear pictures can be retrieved.

The first horror movie I ever saw was The Amityville Horror on TV when I was no older than 8 or so. There was one scene in particular that frightened me—the part when there are eyes staring in the window from outside in the darkness. I’ll always remember that first feeling of dread seeing that scene as a child. After that I saw The Exorcist. From then on, I was hooked.

Every time my parents took me to the grocery store they’d let me rent a movie (This was back when supermarkets still had video rental sections). I’d go for whatever had a cool picture or a horrible title. I had no idea which movies were good and which weren’t. I’d only seen the two, so I was dosed with random movies on a weekly basis. Some of the first movies I can remember renting were Dead Alive, The Ice Cream Man, The Evil Dead, Evil Dead 2, Army of Darkness, Psycho Cop, Night of the Comet, Night of the Living Dead, The Fly, The Fly 2, The Gate, and many more.

None of those movies frightened me. I laughed through most of Evil Dead.

The only movie that scared me other than that one scene in The Amityville Horror was Fire in the Sky. I know it’s not technically a horror movie, but nothing before or since has ever actually scared me in a horror movie. When I saw that as a kid I slept with the lights and TV on for almost two weeks. Monsters, demons, killers; none of that bothered me. But aliens scared the hell out of me.

My love of horror led me to discover a book I’m sure most are familiar with. ‘Scary Stories to Tell in the Dark’ by Alvin Schwartz. The artwork on the cover was what drew me to it. I read all three of those books with great enjoyment. And I even read them to my own kid as bedtime stories (Horror runs in my family—4 generations now). That led me to reading more horror, which ultimately brought me to the realization that I wanted to write things I hoped would be terrifying.

Feel free to comment. I’d love to hear what horror movies have scared you the most! 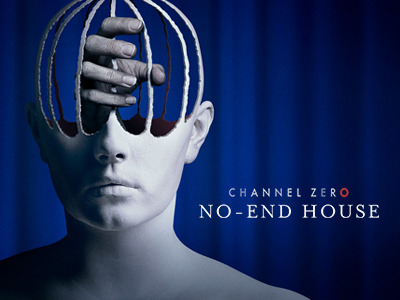 It’s not often I write about a television series, but Channel Zero appealed to me five minutes into the first episode. I kept saying, “I’d die in this show, because I know damn well I’d be first in line to go in that house.”

Oddly enough, I’d never heard of the show at all. Of course, I don’t watch cable TV and it was on the Sci-Fi Channel (I know it’s SyFy now, but I refuse to accept that). I was introduced to it on New Year’s Eve by my date as something to watch during dinner. I’m glad we were done eating before certain parts… We ended up watching an entire season in one sitting. I started with the second season, No-End House, as she’d already seen the first, Candle Cove. It’s sort of like American Horror Story where each season is a completely different storyline so it doesn’t matter which one you watch first.

Both are great, but I felt Season 2 had a more fast-paced flow than Season 1. I’d almost recommend starting with Season 2, No-End House. Candle Cove moves a bit slow in the beginning, but keep watching. The end is worth it.

That’s one thing I’ll say about this show. They know how to make a good ending!

I’m surprised the show hasn’t gathered more attention. I feel it’s underrated, which is why I’m writing about it. Season 3 comes out soon, within a month or two from what I’ve read. I’m excited to see where they’re going to go with it!

I made this post short, as not to spoil the show for you with details. Just here to spread my love for a good horror series.

Thanks for reading! And be sure to follow my blog for more horror-related stuff! 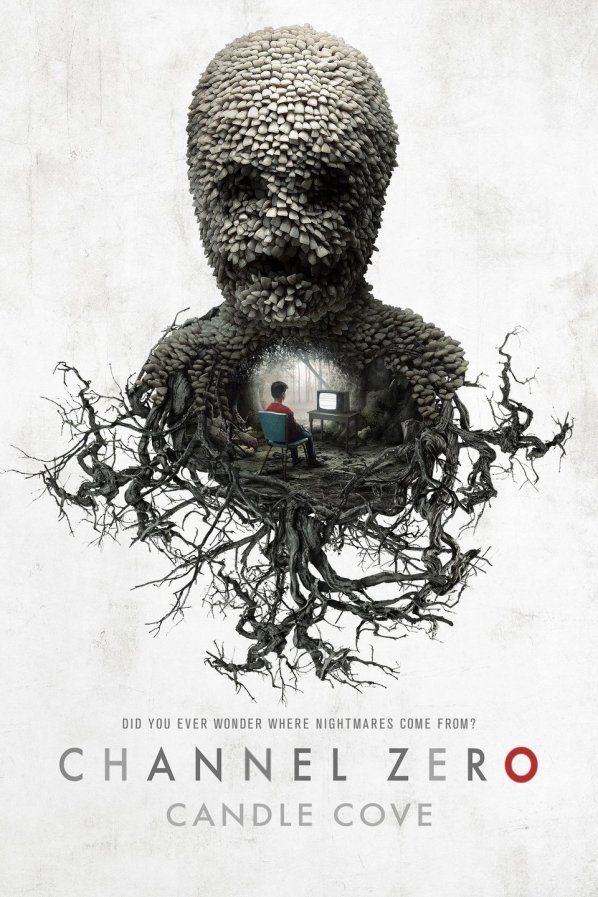 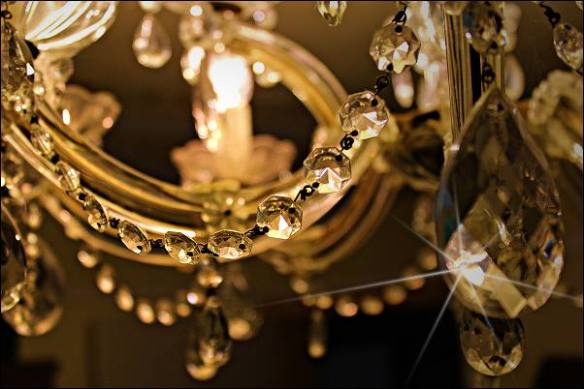 It’s a new year, with all hopes set on good fortune and a brighter outcome. Read the visions of seven writers, who imagined darker possibilities…